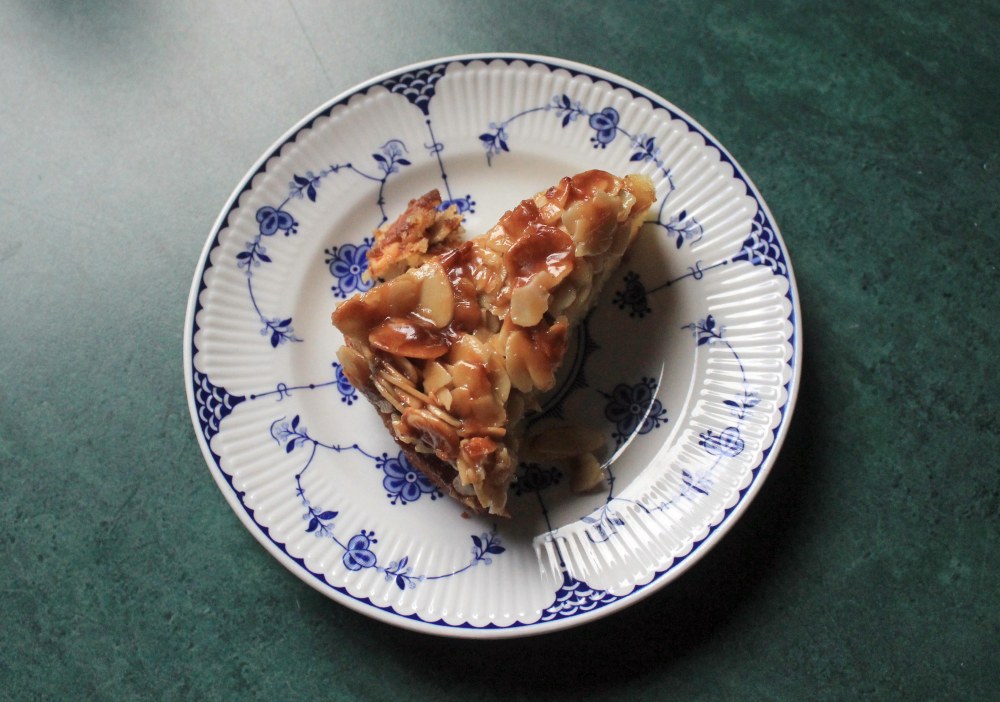 So I finished the baking portion of this project a couple of weeks ago, but I’ve been avoiding writing, waiting for some sort of certainty on how or whether Brexit is going to be completed, and the conclusion I’ve come to is that it’s likely to go on forever, so I might as well finish this off.

When I was baking this cake I had a moment where I remembered why I decided to do this project. Not just because of Brexit, or because it seemed overly ambitious in a way that would challenge me not to give up, but because I bloody love baking. There are times during the last year when it’s been difficult not to get caught up in, well, the difficulties of baking a whole bunch of things I’ve never baked before, feeling out of my depth, and occasionally failing to produce something as it’s supposed to be. But this toscakaka (caramel-almond topped sponge) is familiar, the words of the recipe are ones I’ve read before, and it felt so easy to know that I would put these ingredients together and they would result in something I was proud of. It was a bright but blustery day, the light was perfect for taking photos in my kitchen, I had music on loud, it smelled of the daffodils I bought the day before (and then the smell of baking cake took over), and Oscar was on his way home, so I was baking knowing that he’d come home to freshly baked cake that wasn’t a shambles, or to find me having a crisis of confidence, mid-panic, trying to figure out what on earth to do next. It was just baking – putting a few things together which result in something delicious – and it felt like such a relief.

I still haven’t decided what’s next after this project, though there are only two posts left after this one. I had some grand plans, but I think for a little while I’m just going to focus on things that make me feel like baking this cake did – heartened and reassured by the familiarity of it all. This week I get to bake for my book club, and I actually get to completely freely choose what to bake them rather than giving them whatever I’ve made from whatever country it is that week. It’s nice.