This was something of an undertaking. It seems I’ve made a lot of extravagant layer cakes so far in this project (or was it just one? They seem like many now…), and this one was certainly that.

You’d be well advised not to go into making this without several hours to spare. If you’re short on time, as I was, you will need to draft in an additional human (thanks Oscar), to watch and stir your custard whilst you frantically roll dough out. My arms hurt. Rolling out six pieces of dough to approx. 12×10 inches is no small thing. But perhaps I can be comforted by the fact that I will leave this project with much additional baking knowledge and huge arms from all the mixing and rolling I’m doing. Woohoo!

Apparently madjarica cake is, as last week’s Croatian biscuits were, a Christmas-time cake. I am heartened to find so many various Christmas cakes, which I will endeavour to use in future years (because, you don’t always need Christmas pudding, right?), but not this year, because I’ll be making potentially-Christmas-themed Polish and Portuguese cakes. Yeah. Anyway, enough about Christmas. It’s barely even summer here yet. Madjarica cake is great though, sort of like a hyped-up millionaire’s shortbread, and not excessively rich despite the infinite layers.

I sort of accepted that it was going to be a mess around the edges – anyone who has top tips for rolling dough into rectangles, please do let me know, it’s a skill I’ve yet to acquire. The good news about this is that you cut it into neat little squares, which means you can cut off the messy edges and pretend to the people you feed it to that it was perfect from the start.

And in Brexit news, everything is still terrible and the government seem to be getting nowhere with things. Oh dear. 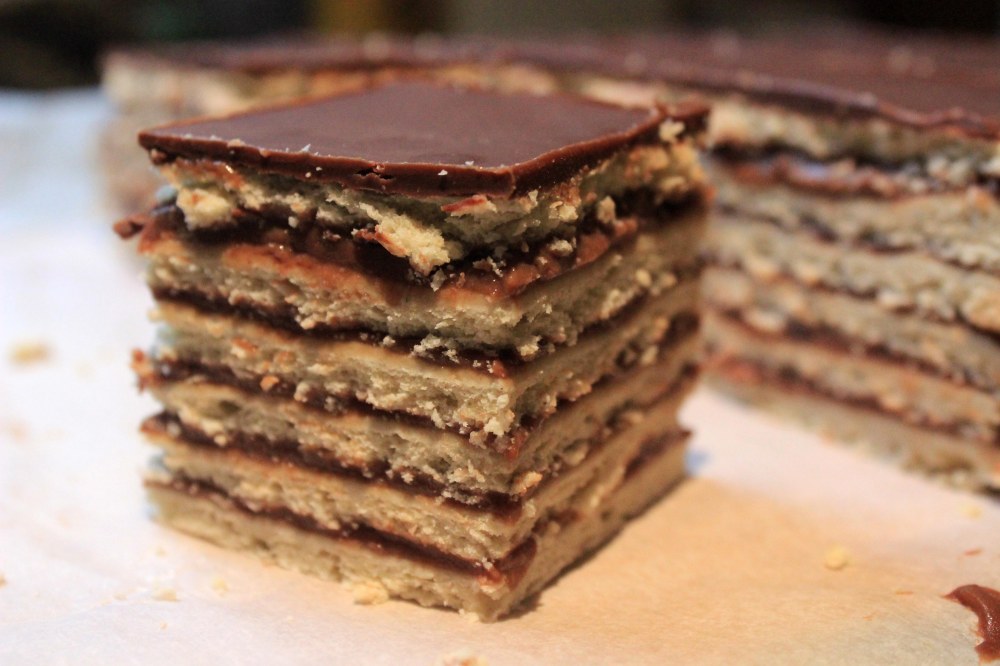