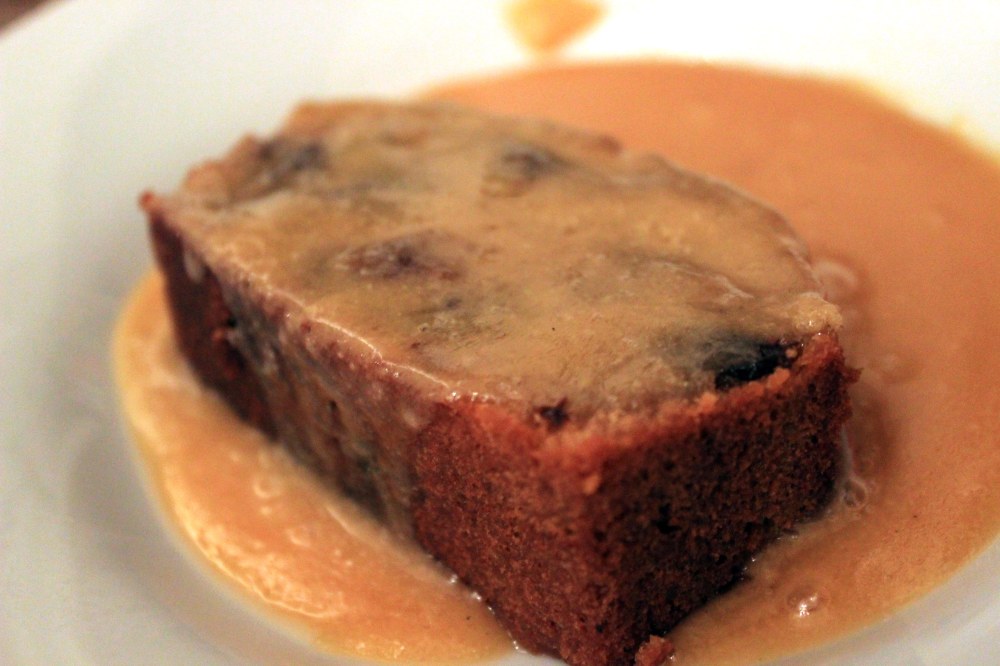 I love sticky toffee pudding. It’s one of those joyously warming autumnal puddings, like syrup sponge pudding, that I could basically eat all day. I’ve never made either of them before though, I’ve only had shop or restaurant versions, and that seemed a shame. So when I saw a recipe for sticky toffee pudding in Peyton & Byrne, I was like ‘game on!’

Unfortunately, it was almost a disaster. Twice. I made the pudding without a hiccup, and then ruined the toffee sauce whilst I was on the phone to my old housemate talking about how terrible letting agents are (because they are awful, horrible companies who pride themselves on taking people’s money for no reason). So that went in the bin. Then I tried again the next day – and the same thing happened. This is the second time now that Peyton & Byrne has let me down, and I’m not sure if it was me doing something wrong, or the hob was too hot (trying to get used to electric instead of gas), or whether the recipe was just wrong. I decided on the latter. Trying to boil water and sugar together just resulted in it drying out and crystallising in the bottom of the pan. I think the water to sugar ratio was wrong, but after it doing it for the second time, I decided that rather than throwing away another 300g sugar, I would attempt to salvage it. So I added cream and golden syrup and butter, and it got better! It took a while of me slowly heating it trying to get the sugar to break down, and also scraping it off the sides of the pan – my housemate found this hilarious. But after a while, it became toffee sauce. And I got to eat sticky toffee pudding, and it was good. Most other sticky toffee pudding recipes I looked at didn’t involve boiling sugar and water, so I don’t know what that was about.

The bodged sauce that I ended up making certainly isn’t ideal though. When reheating the sauce to eat with later portions, it was very grainy (probably due to earlier crystallisation) and FAR too rich. And I really like sweet stuff that’s kind of sickly. But this was just too much. So below is an adapted, untested, but hopefully good recipe for it!

1. Preheat the oven to 180C/Gas 4. Grease and line a 20cm square baking tin. Mix the dates, hot water and bicarb together and leave for a few minutes to soak.

2. In another bowl, beat the butter and sugar until pale and creamy. Add the eggs one at a time, mixing well each time. Add the date mixture and mix well. Gently fold in the flour.

3. Pour the mixture into the prepared tin. Bake for 30-40 mins or until a skewer comes out clean. Remove from oven and leave to cool whilst preparing the toffee sauce.

4. Put half the cream, sugar and butter into a pan over a moderate heat. Stir regularly, until the sugar has dissolved, then bring to the boil for a few minutes until the colour starts to darken and the sauce thickens. Mix in the golden syrup and the rest of the cream. Cut the pudding into squares and pour the sauce over. Reheat when necessary.