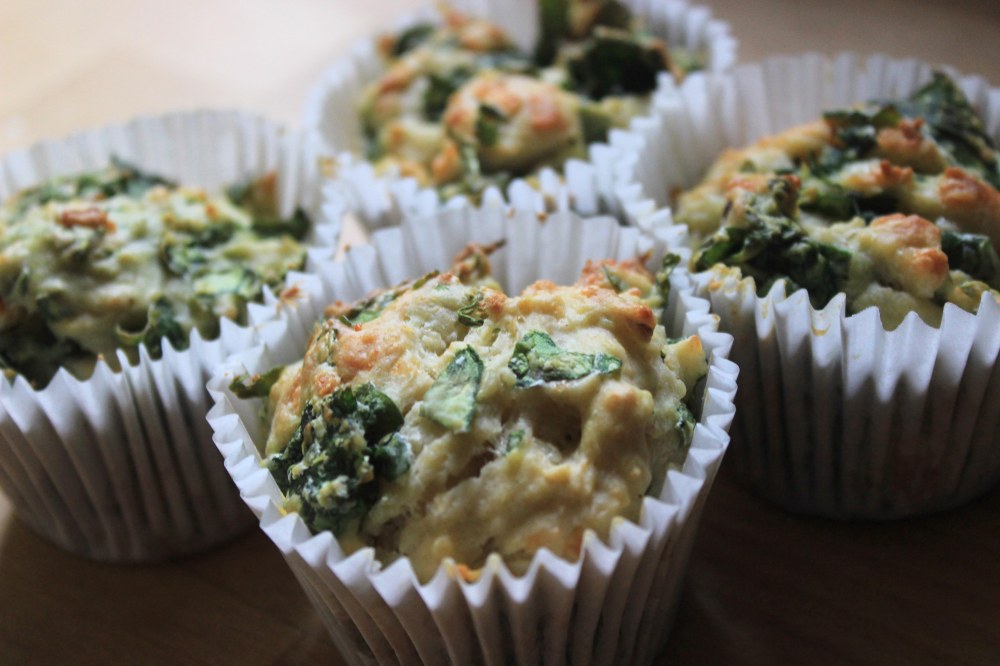 So I’ll be leaving Canada soon :(, and to go with my sadness about leaving my friends behind, here’s a whiney post about how increasingly disappointed I am with the Hummingbird Bakery Cookbook. Up until this year I’d mainly used it for cupcake recipes which for the most part turned out well and were tasty, etc – but now I’m starting to sample more of the other things the book has to offer, I’m starting to realise how disappointing, some of the recipes are. These spinach and cheese muffins were a disappointment, no two ways about it. I really like the idea of savoury muffins which is why I decided to make them, but they’re kind of tasteless, even with all the cheese – the only thing giving them flavour is the red onion. I know spinach doesn’t taste of much, but even so. The quantity of spinach is ridiculous, there’s so much that it’s almost impossible to make it disappear into the muffin mix. If I wanted to eat them again (which I don’t) I would start with half the amount, so 65g, and then add more as seemed necessary.

The recipe is below, maybe someone else will be able to make some better versions than I did. I’m kind of disheartened with this book, and I might swap out some of the recipes I have left to make from it on my list for other, better things.

Also they went mouldy within a few days. NOT COOL GUYS. Seriously.

Next week: I’ll be back in England and making Semolina Cake with Honey and Pistachio!

1. Preheat the oven to 170C/Gas 3. Melt the butter in a saucepan over medium heat, then fry the onion until cooked. Set aside.
2. Put the flour, baking powder, cayenne and cheese in a large bowl. In another bowl mix the milk and egg together, then slowly pour into the flour mixture and beat with an electric whisk until well mixed. Stir in the onion until evenly dispersed.
3. Spoon the mixture into the paper cases until 2/3rds full and bake for 30-35mins, or until deep golden and a skewer inserted comes out clean. Leave to cool slightly before moving to a wire rack to cool completely.