I think one of the things I’m enjoying most about having this list is that I created it entirely based on what I wanted to bake, as opposed to what I was capable of baking. And this is one of the occasions when I’ve baked something that I wouldn’t have necessarily chosen to make unless someone had specifically requested it of me. I haven’t made many cheesecakes in my time, and I’ve certainly never made one that needed to sit in a water bath whilst it baked. I was reading some other posts about New York cheesecakes, and came across horror stories about water seeping into the tin and, I will admit, I got a bit terrified. But after some reassuring words from my sister, who convinced me that being in the water was the only way this cheesecake was going to turn out right, I resigned myself to making my tin the most waterproof tin ever. I am talking 3 layers of foil surrounded by greaseproof paper and tied with string. Because deep down I knew that if I didn’t do that, I would be adding to the stories of people who got watery cheesecake. No thanks. And I am glad to report that whilst my approach may have been excessive, it definitely worked. So there. 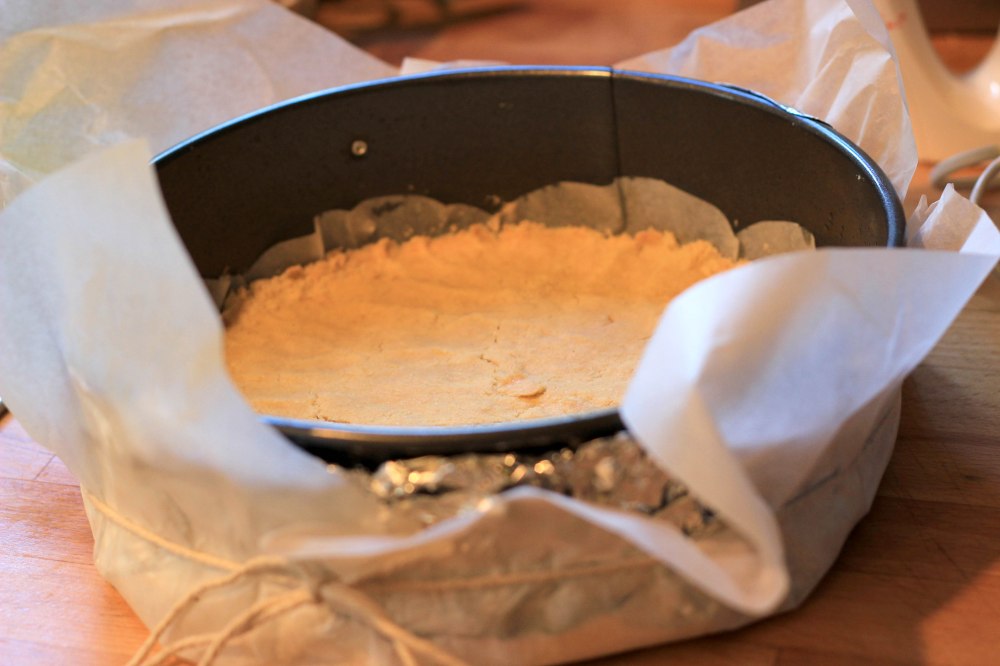 One thing I did realise whilst reading the recipe though was that nowhere does it mention wrapping up the cake tin before putting it in the water, which seems really remiss, seeing as I’m pretty sure most people make cheesecakes in springform tins which are in no way water-tight. I am so glad I did some cheesecake research, otherwise it would’ve been a total disaster.

Having said that, I didn’t leave it in the oven quite long enough, so it didn’t set completely in the middle. I also took it out of the oven and forgot about it, when I was supposed to cover it and put it in the fridge, so it developed a large crack in the middle. All in all though it’s pretty delicious, and considering this is my first attempt, I don’t mind too much that it’s a little squishy in the middle. 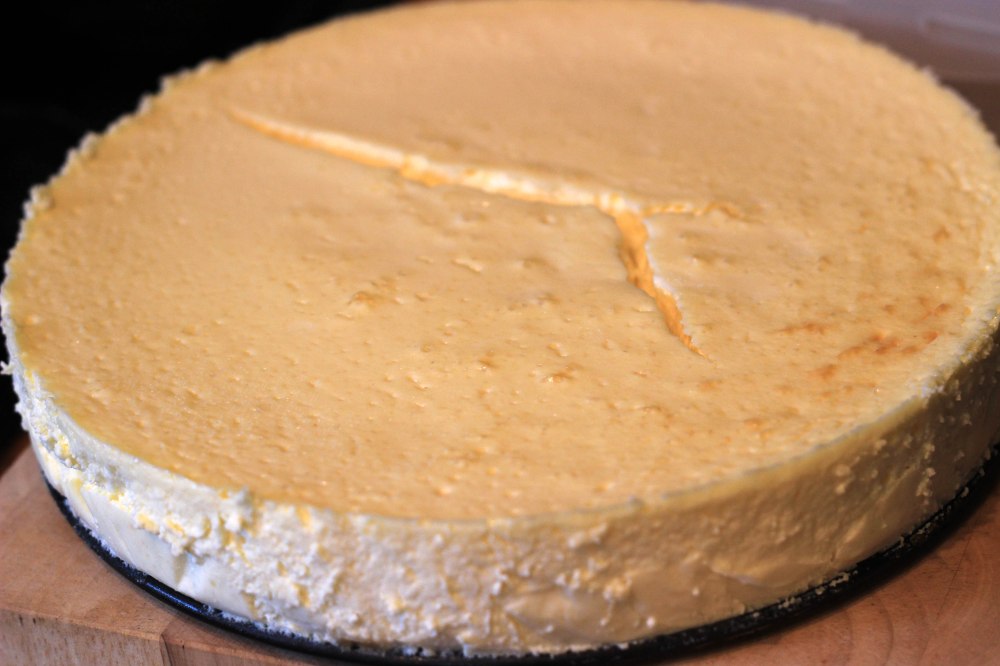 1. Preheat the oven to 150C/Gas 2. Put the flour, baking powder, sugar and butter in a mixer (or with a handheld whisk) and beat until you get a sandy consistency. Add the egg yolk and mix through – it will still be sandy but a little more moist. Press this mixture into the base of the prepared cake tin using your hand to flatten and compress it. It must be pressed down to form a dense base.

2. Bake for 20-25 mins, or until golden brown. It should have lost its sandy texture and come together to form a coherent base. Set aside to cool.

3. Put the cream cheese, sugar and vanilla extract in a mixer (or with a handheld whisk) and beat on a slow speed until you get a very smooth, thick mixture. Add one egg at a time, while still mixing. Scrape any unmixed ingredients from the side of the bowl after adding the last egg. The mixture should be very smooth and creamy. Be careful not to over mix or the cheese will split.

4. Spoon the mixture onto the cold cheesecake base. Put the tin inside a larger tin or in a deep baking tray and fill with water until it reaches two-thirds of the way up the cake tin (wrap your cake tin in foil if necessary!!!) Bake for 30-40 mins or until golden brown but still wobbly in the centre. Don’t overcook. Leave the cheesecake to cool slightly in the tin, then cover and refrigerate overnight before serving.