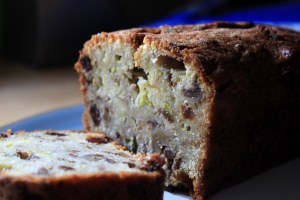 I’ve only baked with courgette once before. It’s one of those vegetables that doesn’t really scream “bake with me”. In fact, I had a lengthy discussion with my colleague about the merits of baking with courgette. I couldn’t really think of any apart from one – it’s moist. Also, it has quite a subtle flavour – which means if you’re making, say, a cake with apple and sultanas and pecans in it, then it’s not overpowering. In fact, kind of the opposite. The most noticeable contribution the courgette made to this cake was the pretty green lines in the cake when you cut it. All of this said, I am in no way disappointed with the courgette, I just don’t think it’s particularly versatile to bake with. Prove me wrong why don’t you. Obviously I chose this recipe because I liked the novelty of using courgette – and to be honest, it’s pretty good. It comes from Nigel Slater’s Tender, Vol II which is an excellent book.

a pinch of salt

2. Cream the butter and sugar until light and fluffy. Lightly beat the eggs and beat them in a little at a time, making sure each bit is fully incorporated before adding the next. Coarsely grate the courgettes and apple. Squeeze them with your hands to remove any excess moisture, then add to the mixture.

3. Mix the flour, salt, baking powder and cinnamon together and gently fold them into the mixture. Stir in the nuts and sultanas. Transfer to the lined loaf tin and bake for about an hour, until golden and firm to the touch. Allow to cool in the tin before turning out.

Also, over the last week I have been using up old granola and muesli to make muesli bars. Or granola bars. Gransli? Muenola? (That sounds like a disease). I made some granola a while ago, and then got on to a porridge breakfast phase, and now it’s gone a little soft, and I didn’t really want to eat it, but it was also a giant waste to throw it away. So, I decided to make granola bars (I’m just going to say it’s granola). So I mixed 250g granola (recipe can be found here), 250g muesli (you can make your own, but I had some Dorset Cereals stuff) with 200g butter and 200g sugar and a spoon of either honey or golden syrup (I made two batches, one with each, and I think honey works better). You melt the sugar, butter and honey together in a pan, then stir it into the granola/muesli, put it into a tray and bake for about 10-15mins on about 200C. Wait for it to cool, then cut into squares, and it tastes delicious and comes out looking something like this: