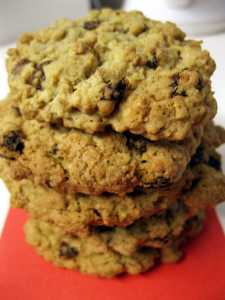 So, I’m on a bit of a cookie phase at the moment. A couple of months ago it was flapjacks, now it’s cookies. The difference being that whilst there is only one flapjack recipe for me, there are literally hundreds of cookie recipes that I want to try out. What with all my current porridge consumption, I’m also enjoying oats right now. And I think I’m starting to learn that oatmeal cookies are the best. Maybe tied with chocolate. Chocolate-chip oatmeal cookies? That’s where it’s at.

Anyway. I realised that Smitten Kitchen has been my everything of late, so I was like, “hey, why not look at one of the other bajillion cookbooks on your shelf?”. Which is when I remembered that The Outsider Tart have some incredible cookie recipes including snickerdoodles which I made for my friend Alice for her birthday, and they were super good. Know what might be better? Maple Oatmeal Cookies. Yes. Yes. I’m going to resist typing a third yes, but I think you get where I’m coming from.

My first note about this recipe is that when you’re mixing together the butter and sugar and maple syrup it smells so good that you think to yourself “don’t need to add the dry ingredients…could just eat this….” and you definitely could. Oh maple syrup! But I did soldier on and add flour and oats and sultanas, and they went in the oven and came out beautifully and delicious and…is it bad that I only want to make variations of oatmeal cookies now? I really like walnuts and pecans, and I feel like that is the only thing that this recipe was missing. The sultanas are optional – they actually suggest raisins, or any dried fruit you want, so dried cherries or cranberries, or I guess you could do apricots…apricots would be really good. It’s been ages since I had sultanas though, and somehow they just looked better than raisins, and they taste great in the cookies too.

2. In a medium bowl whisk together the flour, bicarb and salt. Add the oats and dried fruit (if using), mix thoroughly and set aside.

3. In a large bowl (or in an electric mixer) cream the butter, maple syrup and both sugars until well combined. Beat in the eggs one at a time until evenly incorporated. Stir in the vanilla. Slowly add the dry ingredients, mixing only until they disappear. Place 6 spoonfuls of dough on each sheet leaving 2 inches between cookies (unless you’re making a ton of smaller ones, which is what I did).

4. Bake for 12-15 minutes, or until golden brown. Cool on the baking sheets for 10 minutes before transferring to wire racks.

There’s also a glaze, which I didn’t make, because I didn’t think I needed it, but if you want:

a pinch of salt

1. Whisk all the ingredients together until smooth. You may need to heat the mixture gently to help remove any lumps.

It’s October now, which means that I will be digging out the Fall Baking magazine that Jordi sent me two years ago now, and looking for excellent pear/apple/maple based recipes. For previous Fall Baking products, see here. It is the greatest magazine known to mankind.