So, this week didn’t turn out quite as planned on the baking front. Having spent most of the week coughing and sneezing from the worst hayfever I’ve ever experienced, baking wasn’t really up top of my priority list. It was my friend Jade’s 21st birthday on Thursday and I was going to make a cake for the occasion…this had to be delayed for a few days whilst I finished my coughing and sneezing, and I finally got to make it yesterday.

One productive cake shop related thing I did manage to do this week was to set up a new bank account to transfer some of my money into, so I could separate money spent on baking things from my own purchases of peach iced tea, hayfever tablets and Bill’s Breakfasts (these seem representative of my recent spending). This has made me feel less guilty about wanting to buy things such as this, because it is all in aid of a greater, cake-related cause (as well as my attachment to bees).

This is probably the most ambitious cake I’ve made. Using number tins for the first time was a slightly daunting prospect, and became even more so when I looked in the oven after they had been in for 10 minutes and found the mixture was seeping out the bottom. For whatever reason, luckily it didn’t make too much difference to the end result – the cakes were still thick enough and I got to check they tasted okay by eating the leaked offcuts.

Instead of making both the ‘2’ and the ‘1’ shapes the same flavour, I chose to make two different flavours – Jade’s favourites – coffee cake, and banana, chocolate and walnut cake. The coffee cake had coffee buttercream icing, and the banana cake had a honey glaze sprinkled with sunflower seeds. 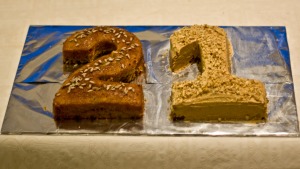 The coffee cake recipe is as follows:

1. Cream together the butter and the sugar.

2. Sift in a third of the flour, add 2 of the eggs and beat together.

3. Add the second third of the flour and the rest of the eggs, beat again.

4. Add the remaining flour, walnuts and the coffee essence and stir together.

Cream all together until well mixed. etc.

Same method and baking times as the coffee cake.

The honey glaze was a bit more of an improvisational task, so I don’t really have a proper recipe for it – it was roughly 4 tbsp honey, 2 tbsp water and juice of a 1/4 lemon with an unmeasured amount of icing sugar to make it a bit thicker (after I put too much lemon juice in and realised too late…)

It turned out really well and I was so happy with it. I’ve never been very good at icing things, but after having to ice a cake which was a “1” shape yesterday, I’ve realised it’s something which I can definitely manage to improve on with practice.

There is something genuinely rewarding about making cakes for other people – baking is (or should always be) a labour of love for people you care about, done in the spirit of generosity to make others happy. Seeing the smile on Jade’s face, and her appreciation of what I’d made when I dropped the cake round her house earlier was worth the hours I spent in the kitchen yesterday worrying about leaking tins and bad icing. I think that’s why I really want to do this, because if there’s one thing that never fails to make people happy, it’s cake.